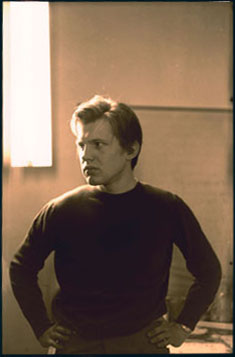 Born 1946 in Vienna, 1966 - 1977 studies at the University of Applied Arts (currently University), with a four-year interruption.

The "Abstract", at the beginning of my studies from 1966 to 1968, appeared to me in all forms, arbitrary and diffuse in content. My aspiration was to understand content not merely as a symbolic, analog superstructure, but to deduce content from the formal elements themselves and to generate a syntax for this. My intervention at that time was an anticipation of digitalization, namely from the singularity of the "monad" to develop complex systems, a pictorial language, a connective tissue, which was later expanded with line structures, number symbolism, geometries, symmetry patterns, oscillating figures and color symbolism and thus gained plausibility. Here I explicitly refer to the description of nature in the new physics as a relational structure and not as a thinglike something.

In retrospect, after 50 years of art work, 1968 - 1971 was the systemic key to my following artistic periods: starting with my digitizing "Monad Rhythmics", I broke the endless oscillation between Informal and Geometric Abstraction, as well as the analogous symbolism of the representational, and paved the way for a new pictorial syntax.

The pictures of the following period "Cosmograms" are also a key phase, here I spontaneously came across archetypes, the pictures are based on a transpersonal experience.

Over many years, the development of various matrix and symbol systems followed.

With the style groups "Matrix" and "Symbolism" I transformed the digitalized monad rhythm into line modules.
Hereby I succeeded not only in depicting content in a deficient analog form, but also in rebuilding it from deeper layers of consciousness by means of rhythms, numbers, symmetry patterns, oscillation figures and geometries, e.g. I related symmetry laws to the cherubim symbolism of the Jewish tradition. This system enabled me to present results of extreme complexity by integrating various levels between consciousness and unconsciousness or heart and mind.

Bringing the abstractions of "objective" science back into a sensual, vivid realm of the human, the balance between the feminine and the masculine.

"Unified Texture of World Religions and Names of God", 1987 - 1995:
In these pictures I worked with spatial linguistic and pictorial elements, in which Jewish, Christian, Muslim and Sanskrit signs become carriers of meaning; the theme of humanity and reconciliation is also expressed in a network of personal pronouns as the location of every possible relationship.

The series "Circles of Light" brings cosmological processes like Primordial Matrices - Spark of Creation.
In the new folder "Transsysteme", images are summarized that were already started around 2000 but could only be finished after a longer creative iterruptum between 2014 - 2020. The three images shown in this folder also result from this interruption phase: Room part, Blue room, With dot.

The completed images are: "Spark of Creation", "Source of Being", "Zero Point Field",
new pictures are "Restoration - Tikkun", "At the end of times". Here, the new interconnections of form and content are continued as in the beginning, as well as processes of becoming and asymmetry.

As an example I cite the content information for "Zero Point Field": criteria of Genesis, from the background field of infinite potentiality, the Zero Point Field or sea of all possibilities, space-time forms develop in numerical progression, inversion and regression, symmetry variables and their breaks as well as overlapping levels as systemic copula. The picture has a formulaic character.

The contents of my artworks are not ideatively predetermined by the creative process, but rather arise from the various creative elements.