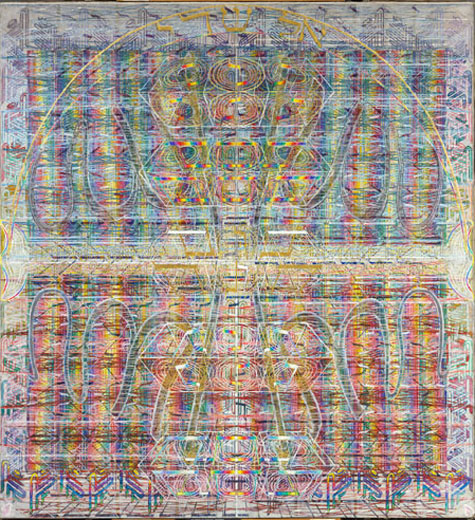 The picture consist of several layers, one on top of the other.

Lowest layer, background: The 12 spectral colors, 7x7, are superimposed on God’s name JHWH, the surface divided up according to the numerical value of the Hebrew alphabet,10-5-6-5 (dark blue and white characters).

The next pictorial layer is the OM sound (really also a name of God) in manifold permutations (colored and in formal turns) all over the surface.

ALLAH four times in the shape of a cross - reversed and reflected.

EL SCHADDAI (in the golden arch above) = God’s name; the Omnipotent; he who constrains and puts limits on His creation; therefore also He who checks evil; the name SCHADDAI is explained by spelling scheomar dai = "He who said Enough!"

The middle of the five central language boxes shows the name HOWE=Being, 1st, 2nd, and 3rd person present tense: name of the Divine in being as such; out of this concept of being emanates the name "He will be" or "He is", the real form of the tetragrammaton JHWH, likewise the name EHJE, "I shall be" or " I am"; being and becoming are joined together in this name.

JHWH, "the Name", cannot be vocalized in this world because all vowels would have to sound simultaneously.

In the "Word boxes" the letters of "the Name" are modulated individually from the top down 12 times each (3 x 4) as a code for "chromatic" quality of vowels.

The shape of the cross imparts the formal structure to the picture.