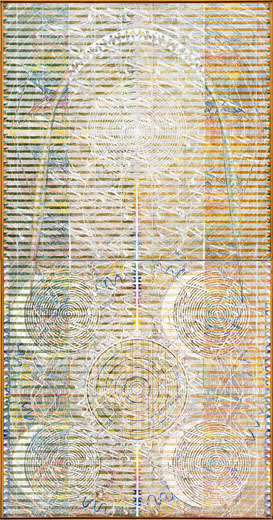 The upper panel shows concentric white circles in the center, corresponding to the “One,” which neither “is” nor “is not;” to the unending, eternal essence, to inexhaustible potentiality for which alone it is possible to exist between Being and Non-Being.

The parable above it is the creative principle and intensification of energy.
Three creative currents, originating from the upper center, are flowing over both panels

The lower panel shows, first, our dualistic world: the fourness of circles (matter, world) shifted into white and dark circles; second: the fiveness of the middle is the Falling-into-One of the above white One; of potentiality with our world, now clad in fullness in the colors of the world. Being and Becoming/Having Become are now connected in the fiveness as the sum total of history.

This is the coming world, the eighth day of creation.